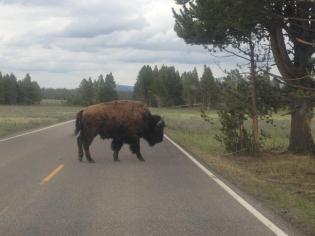 Waiting for a bison in the road – Yellowstone National Park a couple years ago.

Bison have been in the news lately.

President Obama signed legislation designating the American Bison as the national animal. (See, Congress can get stuff done when it wants).

One of the more bizarre bison stories made the rounds this week which explains why the Northern Arapaho community in Wyoming has had a tough time getting any bison for its tribal ceremonies.

Seems a couple international tourists visiting Yellowstone National Park was quite concerned about the health and safety of a newborn bison calf that had wandered away from its herd.

This now famous bison calf was collected by a couple tourists in Yellowstone recently. They thought the young animal was cold and in danger.

The well intended park visitors scooped up the maverick and placed it in the back of their SUV and proceeded to notify the park rangers of their concern.

Turns out their unlawful act of kindness resulted in a ticket and fine.

The story has a not-so-happy ending because after repeated attempts to reunite the calf with its mother and herd, it was rejected and park wildlife officials had to put the young animal down.

Some of my friends were aghast wondering why there isn’t a bison rescue organization,  that could have taken the orphaned calf and nurtured it.

That makes a lot of sense but unfortunately, bison are among the most political animals in the Greater Yellowstone Ecosystem, which includes parts of Montana, Wyoming and Idaho.

Greater Yellowstone Ecosystem has been the home for conflicts between wildlife and livestock interests.

This bison calf would have a big identity crisis had it wandered into Wyoming because it could be treated as livestock or wildlife or both.

What complicates the matter is a contagious disease called brucellosis which isn’t harmful to people, in most cases, but when the bacteria gets into a cattle herd, all animals generally have to be destroyed and the state quarantined.

You’ll recall there was a big furor a few years back about mad cow’s disease. Most recently, there were many chickens destroyed because of avian flu which is why poutry is still expensive.

How does all this happen?

The disease epidemiology is very complex biologically, but causes huge economic impacts that not only include the domestic livestock industry and wildlife management, but also the tourism industry.

Over the years, due to US National Park Service herd management, certain elk populations outgrow their environments. Bison contracted the disease from the over populated elk herds in this case, the GYE.

Bison wander out of the park, elk migrate to and from and the conflict originated when cattle ranchers began to develop infected herds and the blame fell primarily on the bison because they are more sedentary, as opposed to migratory.

Montana treats bison mire like wildlife and through the state veterinarian’s and wildlifr offices there and the US Department of Agriculture, Animal and Plant Health Inspection Service (APHIS) has a brucellosis quarantine facility set up just ourside the park. (Fun Fact – APHIS is the agency that oversees the safety of airports so the chance that birds smack into airplanes is minimized). 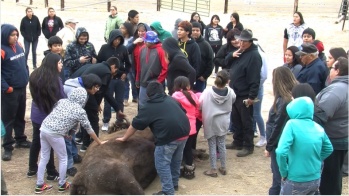 This bison was part of a Northern Arapaho tribal ceremony in November. There are community members who want to reestablish bison on the Wind River Indian Reservation.

Even if that care taking did happen, my druthers would have been to give it to the Northern Arapaho Tribe to help them reestablish a bison herd on the Wind River Indian Reservation in a highly managed pasture – as opposed to free-roaming.

The fact is, Wyoming is currently NOT a brucellosis free state. In the Cliff Notes version of the process, this means the bison calf, if it was tested and found to be brucellosis-free, as well as others could be culled from the Yellowstone herd, quarantined on Northern Arapaho land and allowed to propagate for tribal ceremonial purposes.

Take away the politics and this isn’t rocket science.

Erik Weihenmayer negotiated the Colorado River while not being able to see where he was going.

After stopping in Fort Collins for the Boulder International Film Festival screening of Michael Brown’s “The Weight of Water” documentary at the Lincoln Center, I ventured up to Laramie for a cooperative community workshop led by Yana Ludwig at an intentional community there – Solidarity House Cooperative.

Do Mother and Father Nature plan for weather to drastically change at the Colorado / Wyoming state line?

I got on the road fairly early, but didn’t know how conditions would be. After driving o30 miles over black ice, blowing and drifting snow from the state line to Laramie, I was reminded about “last meals.”

What’s your “last meal” – you know the one you’d eat if you are on death row and your date finally comes up.

It’s not my driving that worries me as much as the bad drivers who think that a big, heavy, 4×4 makes them invincible. There were a few cars that had spun off. The guy behind me towing a top heavy trailer fish-tailed. The driver pulled out of it, which was a sight to see.

I thought about Erik Weihenmayer kayaking the Colorado River rapids through the Grand Canyon.

When I walked into the Coal Creek coffee shop, I was stopped by a patron asking me if I had a Jeep. She and her husband pulling a white tandem-axle trailer ended up in the ditch. “We were only going 35,” she rationalized. The rig was still stuck when I returned later in the afternoon.

While it wasn’t as harrowing a drive as it could have been, it was a reminder that I should have one of my “last meals.” I stopped at Vern’s Place in LaPorte and had their  prime rib. Since being resurrected from death bed in 2014, I eat my last meals as often as possible. I don’t want my actual last meal to be hospital food or cold Pizza Hut at an Econo-Lodge.

This story was originally written December 19, 2015.

It’s a toss up for my “last breakfast”. I had eggs over easy, bacon and tomatoes at Vern’s Place. I got on the tomatoes at breakfast thing while in South Africa.

I spend quite a lot of time on the road traveling around mostly to other towns in Wyoming.

I haven’t had any death-defying driving experiences nor any close calls other than a couple 360 degree black ice spins.

I was driving back from Riverton and made a stop in Rawlins for snacks and gas.

The clerk informed me that I-80 east and west were both closed due to snow and blowing snow.

It was calm, sunny and warm in Rawlins, but I was stuck at the Econo-Lodge there for the night. Even as Econo-Lodges go, this one was desolate.

My “last lunch” pork noodles at the 20th Street Cafe in Denver.

I cruised around downtown which has improved over the years. I had a chili relleno at a small Mexican place and went back to the room, if that’s what you want to call it. The Econo-Lodge was more of an Econo-Fridge. The heater hadn’t been on for quite some time.

Closed roads are a growth industry in Wyoming.

The interstate was closed down because there was no more room along the route to accommodate any more trucks, let alone passenger cars.

Pizza Hut advertises on the room keys, bored, I decided to order my “go to” Canadian bacon and mushroom thin crust with extra cheese. I was able to eat half of it. The cable was pretty good in Rawlins – there’s not much to do there in the middle of the week in the dead of an early snow storm.

I stopped at this Tex Mex place in downtown Rawlins. I was impressed with the offering of TopoChico agua mineral.

At 2am, the REEEEE REEEEE REEEEE! screeched out on the cable TV. The roads were open. I would still wait to get out around 10am when the sun is higher.

I gobbled the rest of the cold pizza and downed a warmed over cup of yesterday’s coffee before getting on the road.

It was a bumper to bumper parking lot from Wolcott Junction to Laramie. Traffic was stopped by an accident on the westbound lane. It took three hours to go 90 miles.

I-80 was officially closed when I was driving back from Riverton recently. White knuckle driving is an art form in Wyoming.

Wyoming winter driving takes some getting used to. If you can successfully drive in Wyoming during even a small snowstorm, you can drive anywhere.

Riverton, like most other Wyoming communities, is centrally isolated from just about every place else when the weather gets nasty.

I grew up in Cheyenne and let me tell you, if you’ve never experienced a blizzard in southeast Wyoming, it’s quite the experience. During certain times of year, it’s so windy, there’s no Final Net on any story shelf.

I always felt lucky about living in Lander and now Boulder along the front range foothills.

It’s so nice to wake up, look out the window and notice that the snow has fallen into neat little piles on tops of fence posts and not rudely strewn about in seven-foot- high drifts.

I’ve met several people in my travels who have been to Wyoming. Besides having visited Yellowstone Park, the second most frequent comment is, “Oh, yeah, one winter during the War, my train was stranded in Cheyenne at the depot while going to California.”

Midway was probably a fonder memory than Wyoming.

I was in Riverton to document a traditional Northern Arapaho bison ceremony. This was my third trip to the Wind River Indian Reservation in three weeks.

It was a successful hunt and ceremony, which is the subject of another post. I was anxious to get back on the road but didn’t check the road reports.

Under most circumstances, I’m a calm and collected driver, but when the interstate suddenly disappears in a puff of white, it’s quite a different story.

Luckily, I didn’t get stuck on the interstate and it closed behind me. I’ve been stuck back in the days before cell phones and GPS.

Back in those days, it was cassette tapes and Glenn Miller and Frank Sinatra tunes soothing me while my car pounded through invisible snow drifts and crept around several 18-wheeler convoys near Elk Mountain.

Disgruntled travelers examining their jack-knifed u-Haul trailer and contorted semi-truck silhouettes in the media strip made me realize how out of control these drives can be.

I can’t imagine being killed by a wild and crazy trucker or freezing to death knowing my last meal was cold pizza and day-old coffee.

My romanticism has me eating bacon, eggs over easy with a pancake for my last breakfast at the Red Willow in the Wind River Casino; pork noodles from the 20th Street Cafe as my last lunch; and steak and lobster from Svilar’s in Hudson, Wyoming.

I better get with eating, drinking and being merry.