The Boulder Co-Living community project people behind the curtain are three cohousing neighbors who have been active in the  cohousing, housing and affordable housing worlds.

Wonderland Hill Development Corporation (WHDC) – Jim Leach is a professional engineer with more than 40 years of experience in the design, construction, and development of sustainable housing, cohousing, planned neighborhoods, and urban infill development. Throughout his career, Jim has led the industry in creating green building strategies and community-based housing that combine high-quality design with maximum value.

Jim has been a spokesperson for the solar energy movement since the early 1980s and was active in the writing and review of the Boulder Energy Code. In 1997, Jim was inducted into the “Built Green Hall of Fame” by the Home Builders Association of Metropolitan Denver.

His award-winning neighborhoods have been recognized by the U.S. Department of Housing and Urban Development, National Association of Home Builders, National Council of the Housing Industry, Urban Land Institute, and The Congress of New Urbanism.

Caddis Collaborative – Bryan Bowen: has been a practicing architect since 1995, dedicated to the design of neighborhoods and eco-buildings, all with the vision of making baby steps toward a sustainable permaculture planet. He also lives in Wild Sage Cohousing.

The Caddis niche is cohousing. Caddis has been designing successful cohousing communities, both nationally and internationally, for almost two decades, including Silver Sage Village, and Wild Sage Cohousing – both in Boulder; Germantown Commons in Nashville; Memel Cohousing in South Africa.

Caddis Collaborative is a leader in sustainable design, zero net energy homes, and livable communities, and applies attention, sophisticated design, and creative solutions to every project. In addition to their skills in architecture, their expertise in grassroots community engagement is essential for large-scale projects, especially multifamily housing and institutional projects.

Caddis Collaborative, reflects their core values in their work, striving to create sustainable communities through sustainable building practices. Not only do they have the capacity to ensure a project’s success, but also have the talent and expertise to do it elegantly and artfully. If it’s worth building, it’s worth doing it well.

Environmental and Cultural Organization Systems (ECOS) –  Alan O’Hashi has been saving the world through his sole proprietorship since 1992.  He is no stranger to complicated multi-disciplinary projects. He has past lives that include affordable housing development, including community outreach and resident recruitment.

Alan lives in Silver Sage Village cohousing. He will be collaborating with his neighbor, Jim Leach, and Wonderland Hills Development in the community building aspect of the Boulder Co-Living community.

He was the first Executive Director for Habitat for Humanity of the St. Vrain Valley based in Longmont where he worked in the community to establish collaborations to assist with housing construction. He developed a 2-acre HFH subdivision, including land acquisition, public improvement funding, processing subdivision through the city of Longmont planning department and city council.

In Wyoming, he served as the Northern Arapaho Tribe, Community and Economic Development Director and managed tribal housing rehab program. Prior to that he was staff to the Lander Housing Authority when it developed the Poposia Senior Housing Project. He was the city project administrator for the Smith Street Passive Solar Housing Project – coordinated joint effort among the state of Wyoming, Fremont County School District #1, city of Lander, private lending institutions.

He coordinated outreach and selection of 20 eligible households to participate, and arranged for their USDA mortgage loan guarantees. While working for the city of Gillette, Wyoming, he coordinated the HUD CDBG citizen participation process for a Section 8 apartment building site development.

Cohousing Nation, by definition, lives a “New American Way” that balances the good of the community over that of the individual; accepts all people as different and all welcomed and valued; power and strength of a few are replaced by consensus and shared decision making among all.

As such, I’m convinced that cohousing communities – as well as other intentional communities like housing cooperatives – have the potential to bridge cultural divides that continue to plague our country today.

The average cohouser has at least some social justice blood running through their veins. I think change will have a better chance of happening by efforts by cohousers.

Inclusion of diverse people will bring about more affordable housing organically as the dominant culture becomes more inclusive based on what I call, “c🕉munification” (cOMunification) that focuses on cultural and societal power and privilege dynamics and how only personal change can balance those out.

Remember the old 1950s TV show, The Adventures of Superman? The narrator told my friends and me to model Superman’s can-do behavior because, “he fights a never ending battle for truth, justice, and the American Way.”

Superman’s “American Way” is based on rugged individualism; cultural divides narrowed by assimilation; and quests for power and control.

There isn’t anything inherently wrong with the “Old American Way,” I think it needs to evolve along with society and one way that can happen is through a collaborative approach that results in truth, justice and a “New American Way.”

I continue to believe that racism, as we know it today, began in 1526 when the first people from Africa were enslaved to work at a short-lived settlement in South Carolina.

I think people want to change and do what’s right, but based on the audiences I’ve met over the years, most people don’t know how to go about it. Personal change doesn’t happen over night and like anything else that requires better skills, it takes practice, and letting go of personal privilege isn’t exactly something people are too crazy about. 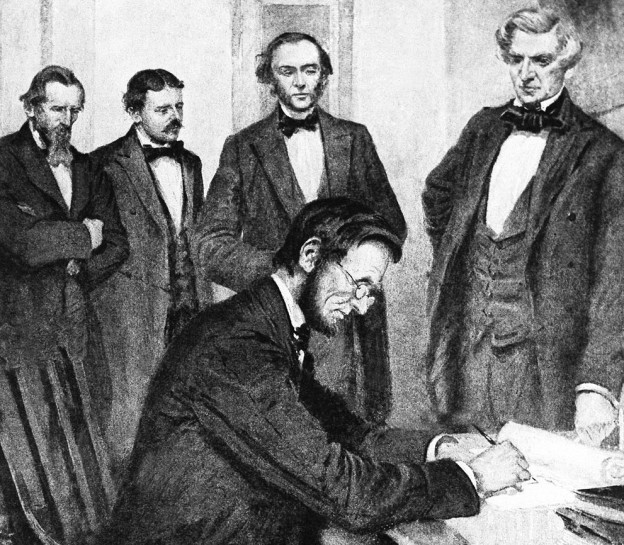 It’s been just 154 years since Lincoln signed the emancipation proclamation.

The current political climate didn’t create racism, it makes it socially acceptable to reveal previously hidden beliefs that oppression of the weak was what, historically, made America great.

Considering America has a 339-year history enslaving people (1526 to 1865) that’s more than double the 155-year history, at least on paper, since President Abraham Lincoln’s emancipation proclamation (1865 to 2020).

There has been social change, but reinventing the American Way won’t happen over night

A part of that reinvention is cohousing, which is a market-based solution. Cohousing brings individuals together to form communities.

Housing is housing, but what differentiates cohousing from other housing configurations is the “secret sauce” that mixes several ingredients. The recipe can be altered to meet differing tastes:

A certain ilk of the citizenry, mostly Baby Boomers and older, who experienced the Cold War, will try to reposition the conversation by clumping intentional communities together as “communes” and “creeping socialism.”

I’m not talking about over throwing out social norms or the government, but rather reacting to how the general market is changing because it’s basically less expensive to live more collaboratively (higher density neighborhoods) and sharing resources (five households don’t each need a lawnmower).

The rugged individualist and free-market capitalists are unwilling to share their wealth and as such, the market reaction is toward c🕉unification.

My observation, Millenials and GenXers who are a generation or two removed from World War II are more accepting of individual differences and more supportive of the collective good out of a need to survive.

Being saddled with the the national debt of their parents, grandparents and great grandparents; forced into a college tuition system that will keep them under the thumb of Wall Street until they are old and gray are two reasons why young people are de-commodifying the American Way.

The tenets of a New American Way would say a home is where we live, not an investment. The only time a house should be commodified is when it’s time to move.

The cohousing brand of community development is also a hedge against unchecked gentrification, which is one of those jargony terms that get thrown around and used in various contexts.

I define gentrification as what happens when people or businesses look for real estate deals, purchase urban property that may or may not be distressed and update them without much collaboration with existing neighbors.

The data are these.

Cohousing communities consist of members who predominantly liberal, highly educated, high income Caucasians women with high perceived social class who, I think, are a more open to bridging cultural divides by “undoing” the Old American Way from within.

That is to say, members of the dominant culture who live in cohousing, have agreed among themselves to change their perspectives towards a New American Way.

“Om” is sanskrit that basically includes everything – past, present, future; beginning, middle end; emotionally and physically.

The end result of c🕉unification, by definition, is an attitudinal paradigm shift by members of the dominant culture who have agreed to increase cultural diversity in the wider culture, one cohousing community at a time.

This doesn’t happen by public policy but by community-based societal change:

While the tenets of cohousing are noble, they are easier said than done since the American Way is pounded into our heads from the moment we pop out of the womb. 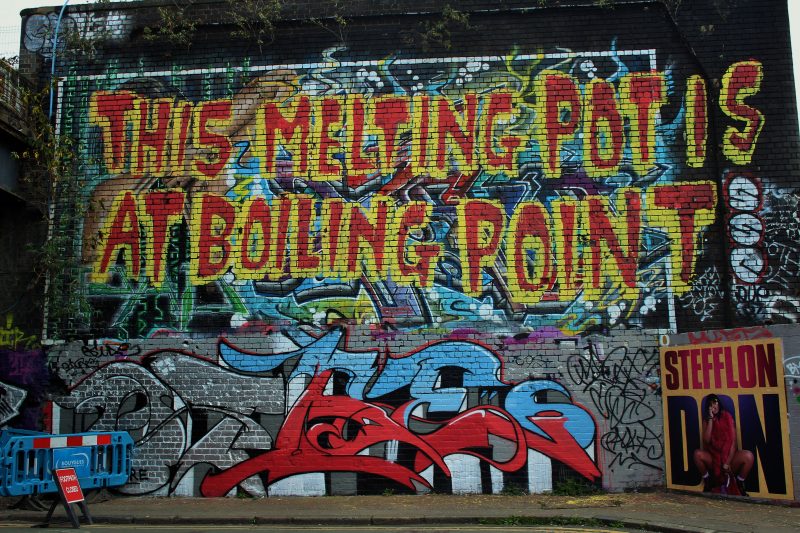 The melting pot is no longer a relevant metaphor.

In the 20th century, the United States was metaphorically characterized as a “Melting Pot” in which races and ethnicities would learn English and assimilate themselves into homogenous Americans.

That was true during racial segregation when the pot contained white cheeses like swiss, edam, gouda, and feta, they blended together to make a mixed pot of white cheese.

Immigrants from Europe who all looked like each other, had the old American Way ahead of them after they learned English and otherwise assimilated.

These days, the country has become racially and ethnically multicultural as a result of immigration and can be a part of the New American Way.

Today, the blended food metaphor would be more like a “Tossed Salad” consisting of separate fixings like frijoles, cassavas, napa cabbage, and all kinds of lettuce that are unified with a common dressing.

In my mind, that common dressing is the “Cohousing C🕉unification” secret sauce, soon available at a farmer’s market near you.