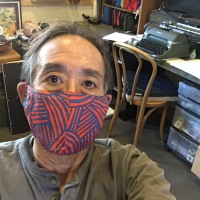 Artist’s Statement: Self-isolated in a cohousing community during the COVID-19 pandemic, veiled by racial justice issues, has moved me to think about how to redefine Superman’s American Way in the context of interpersonal connection as a hedge against loneliness.
What if we lived in a society based on strong communities rather than rugged individualism; inclusion of people for who they are rather than based on assimilation; sharing rather than competition with winners and losers?
I’ve always been a storyteller and involved with community-based journalism since writing my first articles for The Tumbleweed school newspaper as a student at Carey Junior High in my hometown of Cheyenne, Wyoming.
The rediscovery of my largely suppressed past life, flavors much of my current work, and through the power of story, relating what I’ve learned over the years to others.

In my past life, I had a robust career working with local, state, federal and tribal governments in Wyoming where part of my work was affordable housing development through public/private partnerships.

Since I’m not in it for the money, I still dabble in affordable housing project development with the Cohousing Association of the U.S.

It wasn’t until I arose from my deathbed in 2014 that I realized the importance of connections with neighbors and why I’m such a disciple for intentional community life.

I left all that behind while chasing life in the free-enterprise system and moved to Colorado around 1993. That transition was met with a bunch of challenges. Being a risk taker, I knew the possible consequences of leaving the steady public sector.

After being laid off a couple jobs following 9/11, I grew tired of working for marginally competent bosses. I qualified for unemployment twice and was told by my friends to take a risk and try something I’ve always wanted to do, but didn’t because I was always stuck in a “job.”

My second breadline in 2008, led me to some video production classes at the local public access TV station. That training eventually grew into me being Director and Producer at Boulder Community Media.

I haven’t looked back on my evolutionary path.

Self employment isn’t without its challenges. Every morning I wake up unemployed and constantly developing the next project. The latest is the second installment of the Jack Kerouac digital scroll project. The episode is about his trek through six rural Nebraska towns.

Small town spirit is a big interest of mine.

I’ve been involved with community journalism since 1968 when I wrote for my junior high school paper, the Tumbleweed, through high school, and college and then writing professionally for the Wyoming State Journal.

After moving to Colorado, here wasn’t much community journalism opportunity, so I resurrected my writing prowess as a screen writer. My first short screenplay, “Stardust”, won an award in the 2005 Denver Screenwriting Center contest.

Views from Behind the Lens are random thoughts about random topics – sports politics, personal experiences, movie stuff. Much of this was organized into a memoir entitled Beyond Heart Mountain, which is scheduled to be published by Winter Goose Publishing.

“Aging Gratefully: The Power of Community” includes five movies around my recovery from my death bed at Silver Sage Village is on the private screening circuit. The most recent, is about life in cohousing during COVID-19.

In the summer of 2013, I co-produced a SAG indie narrative movie “Mahjong and the West” which premiered at the semi-important Woodstock Film Festival in October 2014 and now available on Netflix.

I wish I could say I was becoming a mega media mogul, but I’m too much of a do-gooder and prefer to “spread around the wealth.”

BCM is a non-profit production group dedicated to democratzing electronic media on the large and small screens, printed page and stage by providing sustainable and community-based content.

I mostly work with community based media producers, organizations, and socially-responsible businesses to develop their content via – the written word, electronic and new media, the visual and performing arts in a culturally competent manner – I’m what’s commonly called a niche TV and movie producer.

Along with all this is plying my forte’ – fund development through grant writing, sponsorship nurturing and event planning.

Based on the social and cultural turmoil that have reared their ugly heads over the past few years,  I dusted off my community and economic development hat and positioned it as Environmental and Cultural Organizational Systems – ECOS.

There’s a tab on the website that explains what ECOS is doing. During these times of intercultural conflicts, political upheaval and cultural divisions, there’s a need for cultural competency training, diverse housing opportunities and cultural brokerage to assist businesses and organizations better manage the change that’s happening in the world around us.