Ronald Reagan signed immigration reform into law in 1986 that was sponsored by former Wyoming US Senator Alan Simpson. The law gave amnesty to 3 million undocumented people.

For the past 150 years, the US government, railroads and agricultural industries welcomed immigrant workers from Mexico. How did they end up coming to the United States in the first place?

Rather than keep immigrants seeking asylum detained, why not give them all temporary visas and put them to work. That’s why they trudged hundreds, if not thousands of miles to America.

I heard there are upwards to 50,000 asylum seekers currently being held around the country awaiting court hearings.

They’re fleeing danger in their homelands, need local sponsors and something to do once they are granted asylum. Anyone who thinks they are going to take their jobs, that’s just hyperbolic race-bait ranting.

What work needs to be done? Here are a couple ideas:

For the record, I’m not in favor of cutting illegal immigrants any slack. I was an illegal alien and kicked out of Mexico in 1991 for working in Zacatecas on a tourist visa from Jalisco.

My business partner and I were stopped by the federal police, held at machine gun point in the middle of nowhere between a small town of Sombrerete and Fresnillo.

One soldier questioned me in English, my partner in Spanish hoping we would give conflicting stories.

They tossed our pick up truck, groped through my luggage, put everything back and searched again. I think they were looking for drugs. Around this time, the United States and Mexico agreed to stifle cocaine and marijuana traffic. Zacatecas is just south of Colorado.

Luckily for me, they let us go.

I was caught using a Mazatlan tourist visa, but actually working in Zacatecas. I ended up getting my paperwork together and made formal application, along with $97.00 USD and obtained the equivalent of a green card.

A year or so ago, I listened to a presentation by Lu Rocha at a workshop organized by my grad school Center on Domestic Violence at CU-Denver.

She gave a history of the Latino/a/x/ labor force in the United States that dates back to the construction of the transcontinental railroad in the 1800s and propping up the war efforts between 1942 until it’s repeal in 1964.

Immigration issues have been in the news lately. There’s talk of expanding the number of immigrant detention centers in Texas reminiscent of the three war relocation camps set up during World War II to detain and intern Japanese mostly from the West Coast.

POTUS 45 repealed DACA put in place by President Obama in 2012 as a stop-gap measure to protect kids of undocumented residents.

The Reagan administration signed the Immigration Reform and Control Act in 1986 which heightened border security but also granted amnesty to 3 million undocumented immigrants. This was a bi-partisan effort led in the US Senate by Wyoming’s Al Simpson.

Red and Blue presidents and congresses failed to act on immigration reform until Obama in his lame duck term issued the Deferred Action on Childhood Arrives (DACA) executive order which cut some slack to kids brought to the US by their undocumented parents. It was a compassionate Band Aid.

POTUS 45 used his bully pulpit, but failed to overturn DACA. Congress continues to be at a standstill, more so now because the House flipped Democratic in 2018.

Immigration reform is a wedge issue for Republicans. They are against immigrants, generally, because of they supposed are “taking of American jobs.” Are all Republicans cleaning toilets, picking beans, or loading dishwashers over at Denny’s in fear of losing their jobs?

At the same time, American business is reliant on immigrant laborers who perform low-end work that regular Americans won’t do which is a throwback to the transcontinental railroad construction and World War II worker shortage. 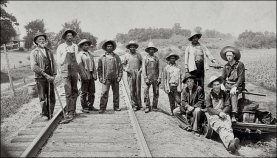 The Transcontinental Railroad was completed by laborers from Mexico.

Traqueros – In 1881 Governor Luis Terrazas of Chihuahua drove a silver spike completing a rail line linking Mexico and United States which allowed immigrants transport to the United States and coincided with the West’s construction of the transcontinental railroad.

Mexicans were the dominant immigrant labor laying track in the late 19th and early 20th centuries. Despite low wages compared to their native born coworkers and discrimination, immigrant Mexican laborers became permanent residents, not by law but by fact. By the time of the Great Depression, workers moved to the cities in search of other low-skill work. 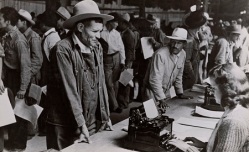 The US Department of Labor and the Immigration and Naturalization Service collaborated on the Bracero Program at the start of World War II. Braceros were allowed in to the US to provide help on farms during wartime.

Braceros – The bracero program (Spanish for manual laborer) began in 1942 and operated as a joint program of the State Department, the Department of Labor, and the Immigration and Naturalization Services (INS), as it was known then, in the Department of Justice.

Laborers from Mexico were promised better living conditions in camps, including housing, meals and toilet facilities. They eventually were paid a minimum wage of 30 cents / hour. The pact also stated that braceros supposedly would not be subjected to discrimination and exclusion from “white-only” areas.

During World War II, the bracero program intention was to fill the labor gap, particularly in agriculture. The program lasted 22 years and offered employment contracts to 5 million braceros in 24 U.S. states—becoming the largest foreign worker program in U.S. history.

The bracero program caused problems on both sides of the border with labor shortages in the northern states in Mexico and resulted in illegal immigrants who remained in the United States. Millions of Mexican Americans attribute their roots to their fathers and grandfathers who crossed the border as braceros. 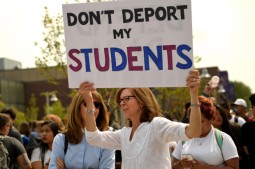 DACA – Circle back to DACA kids. They are the modern day traquero/a/x and bracero/a/x. They are people who arrived in the United States under the radar as children.

Like the braceros and traqueros, while they should have returned to Mexico, those families have remained – while looking over their shoulders – without documentation and became productive members of their communities.

The DACA kids ended up with high school and college educations, contribute to society in professional jobs, have families of their own with kids in local school systems. They pay taxes and volunteer in their communities.

When the Bracero Program was ended in 1964, the positive outcomes were better working conditions for farm workers thanks to advocacy by activists including Cesar Chavez and Delores Huerta. There were no immigration laws that turned traqueros back to Mexico.

DACA was a short term fix when Obama acted because Congress didn’t. The immigration issue has come full circle from 1986.

Whether Congress and POTUS 45 get their acts together on immigration reform will be a defining moment for the Republicans like it was for Republicans and Ronald Reagan.

Until then let’s figure out how to engage asylum seekers in useful ways while they awaiting their hearings. 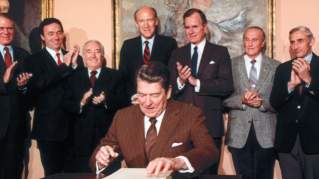 “We have consistently supported a legalization program which is both generous to the alien and fair to the countless thousands of people throughout the world who seek legally to come to America. The legalization provisions in this act will go far to improve the lives of a class of individuals who now must hide in the shadows, without access to many of the benefits of a free and open society. Very soon many of these men and women will be able to step into the sunlight and, ultimately, if they choose, they may become Americans.” Ronald Reagan on November 6, 1986 upon signing the Immigration Control and Reform Act.