Whether you like POTUS or not the only way to change things is at the voting booth.

I’m growing tired of my progressive friends espousing what they despise about our sitting president.

Yeah, he’s a womanizer, disrespectful of people different from himself, a pathologic liar and otherwise a dastardly dotard – not to mention his staff members.

But those are given.

In which case, why rehash all that day-in and day-out?

Democrats have no identity, let alone a story boiled down to an elevator speech.

It’s like arguing that cigarettes cause cancer. We all know that. Even the tobacco companies believe it. It’s printed on every cigarette pack. I won’t even get into the “it was the Russians” or “it was the electoral college” or any of the other red-herring issues. The Trump campaign was just a little smarter, but I digress.

Why waste time, words and energy?

Every anti-POTUS comment translates into a free ads for the sitting president that energize his base even more. POTUS stands for “Making America Great Again” but his roadshow casts that in a different light. Witness his recent whistle stop in Montana.

If you’re not in favor of making America great again, what do you believe?

As of June 2018, this map shows there are 90 competitive districts (brown). You can rest assured that the Republicans are out in force.

Here it is 2018 – the midterm election cycle – and there is no coherent message from the Democratic Party.

Debbie Wasserman Schultz is trying to reinvent herself; Elizabeth Warren is on the stump; I still get emails from Bernie. But it’s the same old anti-POTUS schtick.

If I’m wrong on this, please set me straight.

Sure there are candidates who have this figured out, like MJ Hegar and Alexandria Ocasio-Cortez running for congressional seats in Texas and New York City.

Based on Hegar’s video, I put down $5 and am following her congressional race. No facts and figures cluttering up the really great story.

The map on the right shows where the contested districts are located. If you live in a safe district, like me in Colorado’s 2nd CD, send your money and pound the pavement for candidates who may have a chance turn the tide. In the fall of 2017, I spent a lot of cyber-time helping get Doug Jones elected. As an analog action I had pizza delivered to volunteers in Huntsville.

There’s a lot a volunteer can do from afar.

This is a 1980 Ronald Reagan “Make America Great Again” campaign button from my collection.

Republicans are really good at principled messaging. I think it was Ronald Reagan who originally coined “Make America Great Again” slogan and articulated what people feel in his famous “morning in America” ads.

Obama took a page out of the Reagan playbook, with his “Hope and Change” campaign. He was a very principled, retail politician. Unlike his Democratic predecessors he told stories rather than spouting facts and figures.

I picked up a book called “The Political Brain” by Drew Weston. The book shows how a different view of the mind and brain leads to a different way of talking with voters about issues that have tied the tongues of Democrats for much of forty years—such as abortion, guns, taxes, and race. You can’t change the structure of the brain. But you can change the way you appeal to it.

Michael Dukakis was unable to recover from his non-principled responses during a debate with George HW Bush.

In 1988, Mike Dukakis is asked during a debate if he would favor the death penalty for a rapist if he assaulted and murdered his wife, Kitty. His response wasn’t about how horrific the crime is, or how he would feel or his wife’s anguish, he responds with the data show that the death penalty isn’t a crime deterrent.

Republicans have boiled down Democrats to “tax and spend liberals.” That’s a throwback to the 1932 New Deal and the 1965 Great Society. Democrats haven’t gone on the offensive and come up with a four-word stereotype for Republicans.

More recently, NeoCons call progressives “libtards”, a term that has largely gone with no response, but a term that galvanizes their base. 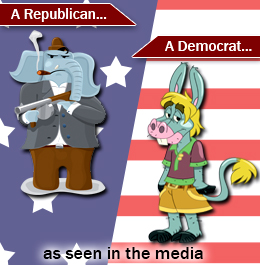 Despite the stereotypes, Republicans have a better story.

When I engage in a conversation. I’ve thought about a principled response and say something like,  “I stand for strong family values – a safe home to raise kids; a strong neighborhood and excellent schools.” It’s usually the end of the conversation.

Restating this in a non-principled jargon-laced light, “I stand for marriage equality, affordable housing, community policing and a low student – teacher ratio.” This would cast me as pro-gay, handouts to poor people, anti-gun and pro-teacher unions.

Not that there’s anything wrong with these stances, but based on the Political Brain, voters will better relate to a candidate based on emotions rather than policy and data.

One of my hobbies is collecting political campaign memorabilia. Here are a few slogans I think are principled. I’ve surmised that candidates who include references to themselves have lost more times than those with visionary slogans. I’ll list them without election year or candidate: