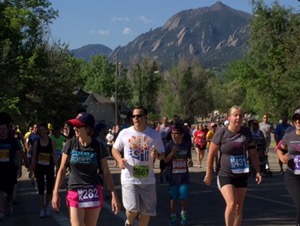 I don’t know why I do the Bolder Boulder 10K. Maybe it’s the familiarity – the Blues Brothers crooning  right out of the blocks; the girating belly dancers on the Folsom Hill and off key Elvis at the 7-Eleven; the Slip ‘n Slide – now there are two.

I used to buy a shirt every year but got rid of all of them except the 2002 race shirt. That was the race that remembered 9/11. That takes the guess work out of my annual wardrobe decision making.

I started covering the race in 2006 when I was with the public access TV station and have been going out on the course getting shots of pretty much anything but the race, including all the bands that entertain the runners along the way.

Mugging with Elvis at the 7-Eleven

It takes me around three hours to finish. I stop about 20 times and spend a few minutes with all the bands and live entertainment along the route. I get out too late to sample any of the bacon giveaway – the other power bar – around the 9K neighborhood. I did notice that the Colorado Pork Producers are now a sponsor and taken over the concession.

When I was recovering from my illness in 2014, I had to take a swig of oxygen staggering into the stadium just before the orange shirts – the mop up crew – threw me off the course. My strength and stamina are way better, except the rock climbing on Saturday took its toll. That’s another story.

This year, I took a step on the wild side and made a Bolder Boulder impulse buy.

I was bound and determined to find a pair of new sneakers – Skechers. Last year, I was sitting at the lunch table with elite runner Meb Keflezighi. In 2015 Skechers was named as the big sponsor of the Bolder Boulder and Meb swears by Skechers. That’s been his shoe sponsor since 2011.

He couldn’t stop raving about Skechers – sort of like when after winning Super Bowl 50, Peyton Manning said that he was going to relax and down a few Buds in reference to his Louisiana business interests.

Not that I’m any kind of shoe aficionado, but I remember Skechers as pastel pink women’s walking shoes with the rounded bottoms. Now footwear for elite athletes?

If there’s anyone who’s the casual runner, it’s me. I bought a pair of Asics in 2002 and wear them once a year for the Bolder Boulder. Needless to say, my shoes are still in good shape.

Last year – 2015 – Skechers had a big trade booth on the Pearl Street Mall. The Flatiron Running Store was the local sponsor and was giving out T-shirts. I picked up a shirt and some literature about Skechers, but hadn’t made up my mind about the shoes.

Fast forward to 2016, this year I visited the Skecher trade booth and tried on a pair  of the 8 1/2 GoRun Strada shoes, but walked away. When I came back, they, of course, were sold, but I tried on every other shoe in my size, but none were quite right, even at $76. (Actually, any of them would have worked, but they were red. I don’t wear anything red because it reminds me of my high school rivals Cheyenne Central).

My $30 Skechers are little too colorful for my liking, but I won’t wear them until next year.

Not to be deterred, I went down to the Flatiron Running Store in the Table Mesa shopping center and much to my surprise, most of their Skechers were on the deeply-discounted sale table.

After searching around, I uncovered one pair, sticker price $130 marked down to $50 and marked down again to $30.

Retail is for suckers.

I got them home and as the Skechers shoe salesman on the Mall explained, the soles are made out of foam. They are light weight and felt good on my feet. As a general rule, it probably doesn’t make much sense to wear brand new shoes on a 10K run, but they were very soft and comfortable.

Afterwards, no bruised up runner’s toe or achy arches. For this kind of foot abuse, I normally need strong support, but not with these Skechers.

Since I only wear them six miles per year, the foam should last me for a while. This model probably is not for hard core runners which may be why all these shoes were on the “buy these before we send them to “Aftica” sale table.

One of my friends was due to have a baby around this weekend. In the pool, I had May 30th and sure enough baby Evelyn was born on Memorial Day.

I played the game of Risk in a past life. The custom of the group bestowed on the winner the imperial honor of folding up the board, sorting out the pieces and putting the game away.

Baby Skechers rooted out of a pile at Nordstrom’s Rack.

In this vein, as the winner of the birth date guessing game, I felt obliged to get a present. I opted for a Memorial Day – Bolder Boulder themed gift of a pair of baby Skechers, which cost $30 – the same price as the pair I bought for the race. I’m pretty sure if Nike or Adidas sponsored the race, my baby shoes would have been way pricier!

After getting to Folsom Field, I happened to see two folks who were the last two finishers being escorted by the orange shirts past the finish line. Turns out the runners in their 70s were Don and Barb Worden from Rock Springs, Wyoming.

They said this is likely their last Bolder Boulder.

Maybe they have the right idea to end their running careers on a high note as the final finishers in 2016.